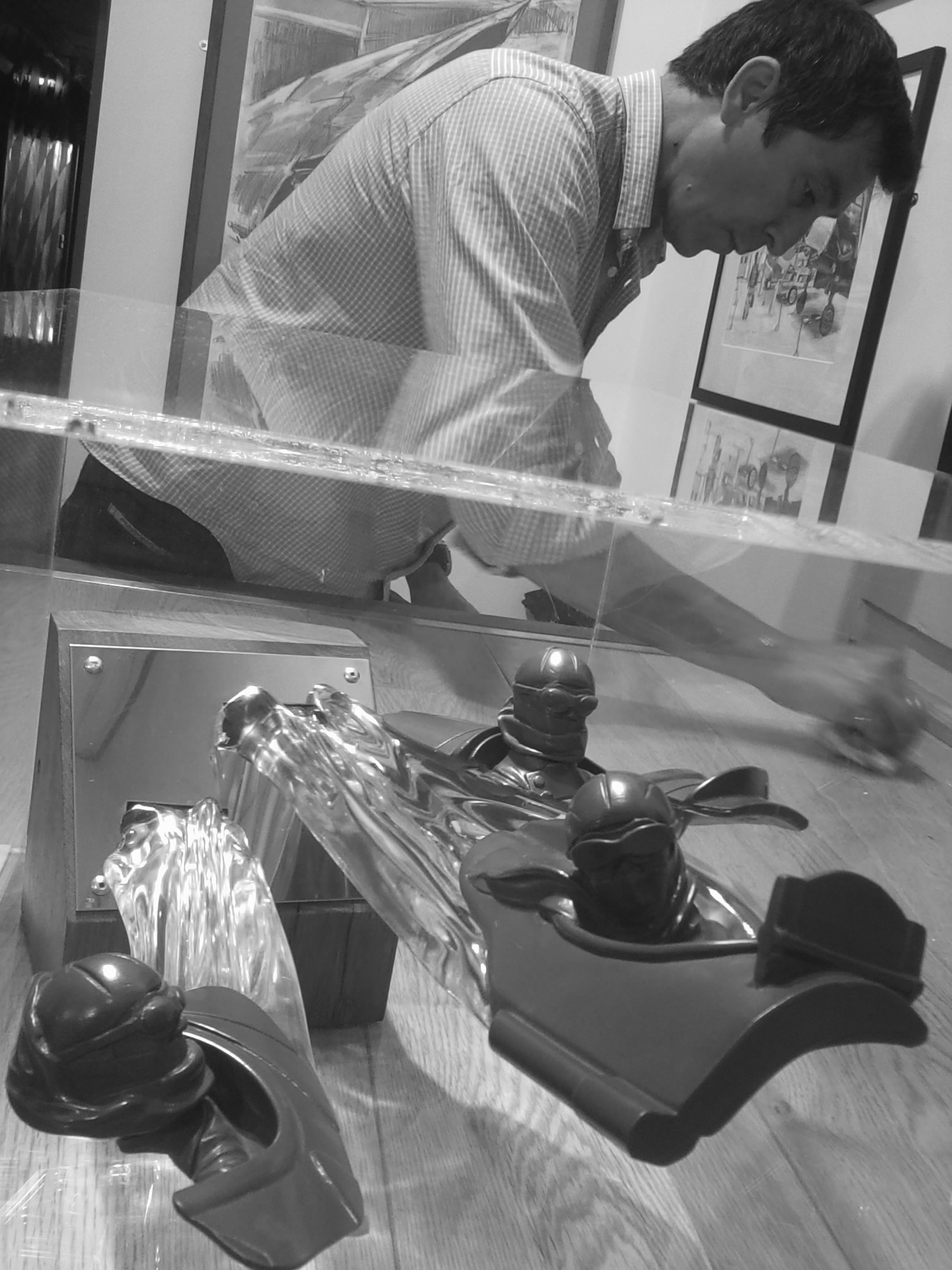 I first encountered Gregs work whilst filming at the Boultbee academy, in Chichester back in 2015 for Channel4. I remeber the reception area was jammed full of really amazing aviation artefacts; spitfire yokes, reflector gun sights, models etc… there was one item that particually stood out amongst the rest though…

On the coffee table, in the centre of the room, surrounded by thick, heavy leather settees was this beautiful Bronze sculpture. Unlike anything id seen before, I instantly fell in love with it, it was an early edition of Gregs Albert Ball piece; ‘Knights Of The Sky’. What struck me was the energy of the sculpture, Greg had managed to capture the speed, and adrenaline of the aeroplanes action in its form. It focussed on the cockpit section and was contained in this perfectly proportioned bronze. I could picture it in my home, and for many years there after wished it was!

I had no idea back then that I would be starting the collection, but when I first conceived the idea, I knew that Greg’s work, and sculptures just had to feature. I had no idea how I was going to convince this extremely talented artist to agree, but I had to have his work!

Greg has been dedicated to the field of art and design for over 30 years. His father was a serving Royal Navy Officer and Greg was born in Haslar Royal Naval Hospital before the family moved to Malaysia. On return from Asia the family moved to Chichester, West Sussex when he was 6, and has lived in the area ever since.

Self taught, Greg began his professional career as an airbrush artist and illustrator on book and magazine covers. In 1995 he started on more hands-on art forms which have become the tactile fluid and kinetic sculpture we see today. Since 2006, he has given his time fully to his sculptures.

His pieces are all original and the result of many months of work. They are created using clays, specialist woods and resins to find the desired fluidity and form. Moulds are then taken from these sculptures, waxes produced and a foundry uses the lost wax method to cast them in bronze. Greg hand finishes the rough castings and patinates all the work himself. Every edition is hand made, signed and finished by the artist making each one individual.

“I wanted to create sculpture which employed the static clarity of a model with the excitement of a kinetic sculpture. Using bronze and glass-clear resins, my art has to purvey movement and energy to be complete.”

Greg has married these two media in recognisable and fluid sculpture. The movement in the bronze and the hand finished resin is a signature of Greg’s work and is recognised internationally as a Percival. He’s an associate of the Guild of Aviation Artists (AGAvA) in his first annual Guild Exhibition at The Mall Galleries first he won two awards for one of his sculptures. Whilst exhibiting in Carnaby Street, he was interviewed on Sky television about his work.

Asked to exhibit his work at The Norman Foster building for one month last year, being the main display for a new show for the ArtmoorHouse Gallery.

The Duke of Richmond is a great admirer of his work. Many editions of Greg’s work are owned by the family of Sir Alan Smith, who was Douglas Bader’s wingman.

I am immensely proud, and honoured to be able to celebrate Gregs work as part of my collection, do take the time to admire his creations and if you would like any more information about Gregs work or any of the pieces then don’t hesitate to contact us here at shop@Arthur-williams.co.uk