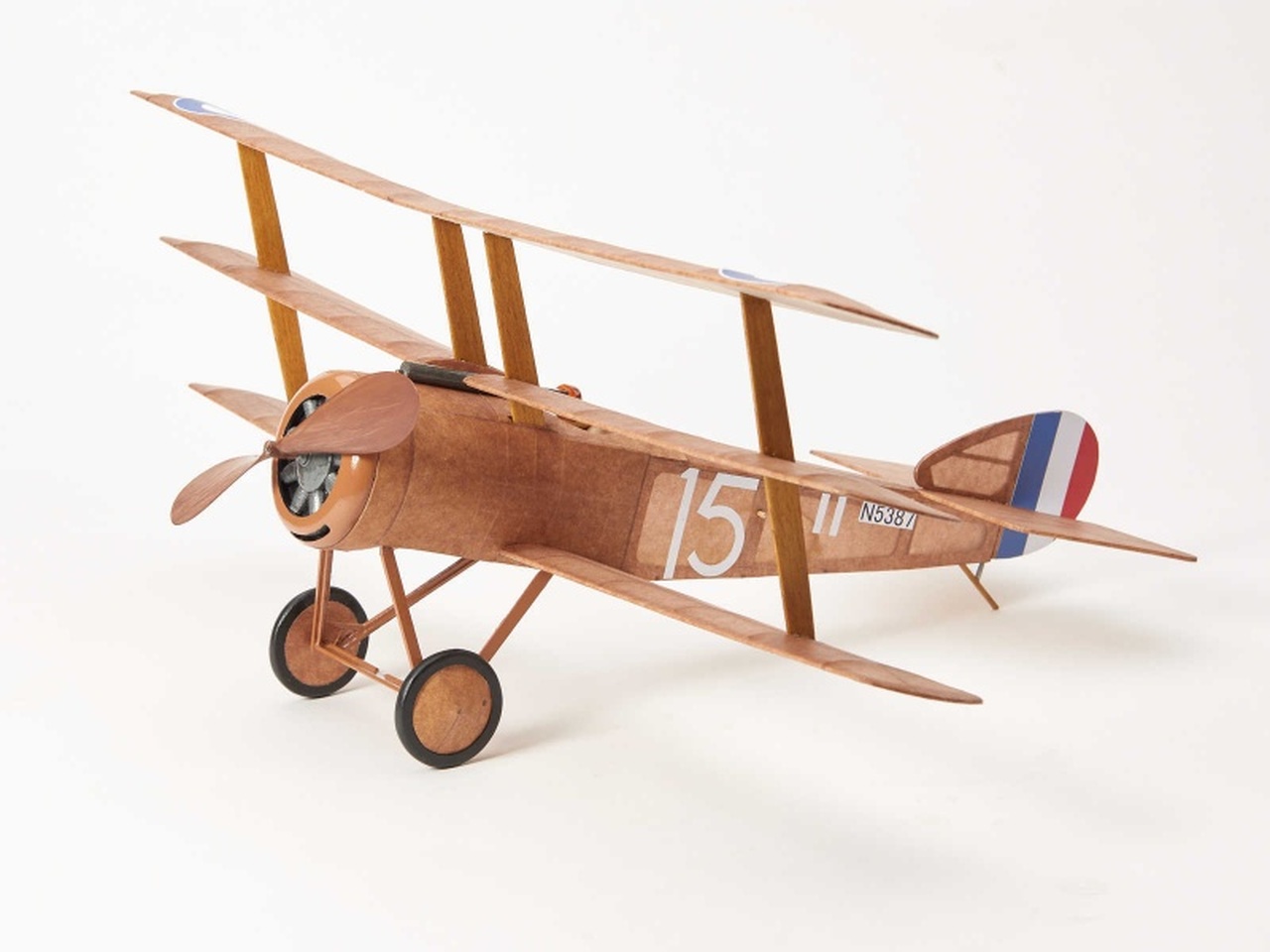 Sopwith’s Chief Engineer, Herbert Smith, developed the Triplane on the orders of owner Thomas Sopwith as a private enterprise for a new scout (fighter) aircraft, with superior rates of climb, roll, and better all-round visibility than current designs. Smith believed that three staggered, narrow chord wings, set wide apart, each with its own set of ailerons would fit the bill. The prototype flew in May 1916 piloted by Sopwith test pilot Harry Hawker (later to form the Hawker Aircraft Company of Hurricane fame). Astonishingly for a maiden test flight, Hawker successfully looped the aircraft three times. Subsequent flights proved that Smith was right and that the “Tripehound” as many pilots came to know the aircraft, had far better rates of climb, manoeuvrability and visibility than any other domestic or enemy aircraft of the day (although this was tempered by slower dives than German aircraft of the same period).

Most Triplanes served with the Royal Naval Air Service (RNAS) where they proved to be excellent fighting machines, although their service was short lived. They were difficult to maintain in the field, and the pace of development at the time saw them overtaken quickly by better designs such as Sopwith’s own Camel and the SE5A. Such was the German admiration for the performance of the basic design, that Anthony Fokker studied a crashed example and went on to use it as inspiration for what became the Fokker DR1 – the triplane flown by the infamous “Red Baron”, Manfred Von Richthofen. Overall nearly 150 aircraft were built. Few original aircraft survive, none in airworthy condition, although a number of reproduction aircraft can be seen, the most famous being “Dixie II” at the Shuttleworth Collection based at the Old Warden Aerodrome, Bedfordshire, England.

This kit is designed for you to build a traditionally constructed, rubber-powered, free-flight model of a 1917 Triplane of No.1  Squadron RNAS. This is a simple but striking scheme, but you can decide to do your own favourite or more complicated scheme if you wish as there are many triplane schemes to choose from. The No.1 Squadron RNAS (latterly 201 Squadron RAF) flew Triplanes between December 1916 and December 1917 over the Western Front before being belatedly re-equipped with Sopwith Camels.

Construction of the model from this kit uses the traditional method of ‘stick and tissue’, that consists of a built up balsa wood skeleton (framework), covered with a tissue skin. The balsa frameworks are built over a plan that is printed at the exact scale of the model, which is in essence a real engineering drawing.

Power is provided by rubber strip motor that is wound up before flight. Free flight means just that – once the model is launched, it is on its own. It must follow a predetermined flight path established when the model is initially adjusted for flight or ‘trimmed’.  This type of traditional building technique and flying requires a degree of patience and skill, but is extremely rewarding.

The Sopwith Triplane is just one of a series of kits designed and manufactured by the Vintage Model Company. Aeromodelling was very popular from the 1950s until the 1980s and following a decline and the loss of UK manufacturers such as FROG, KeilKraft and Veron, a revival is now underway. The advent of modern technology such as laser cutting of parts and the growth of the internet giving access to information on the skills and techniques required to successfully build and fly these models, means new enthusiasts are discovering the joys of aeromodelling every day.

Typically for a small model and in the spirit of the traditional kits, profiles are simplified and adjusted from the original and a relatively large propeller is used. This is done so that the model is light and stable enough to fly on its own, is simple in construction and can work with the rubber motor. These adjustments have been done with care and sensitivity so that the shape and spirit of the original aircraft is preserved as much as possible. Also in the spirit of the traditional kits, additional items required to build the model are things that can be found in the kitchen drawer or are easily available on the high street.

Four balsa sheets with precise laser cut parts and strip wood.
PVA glue for building the wooden frames.
One 150mm diameter plastic propeller.
One pre-bent motor hook and shaft.
A 150mm long piece of 6.4mm diameter balsa dowel for the engine cylinders and gun details.
Three low friction plastic ‘nose’ bushings– one for the propeller and two for the undercarriage wheels.
Piano wire for the main undercarriage legs.
A matchstick for the tail skid.
Three cocktail sticks or toothpicks, one for the motor peg and the others for use in various details
Rubber motor strip.
Tissue to cover the model.
Parts reference sheets (W), full size summary plan sheets (X), scheme diagram sheet (Y) and scheme markings (Z) printed on lightweight paper.

2 in stock (can be backordered)