I’m pleased announce that I’ll be joining the Blades Aerobatic Team commentator panel this season as they wow spectators up and down the country this summer. Follow them on Twitter, Instagram and Facebook to keep up-to-date with dates and locations.

You can read more here »

A plane that ruled the air.. and a presenter who lit up the airwaves: CHRISTOPHER STEVENS reviews last weekend’s TV The Plane That Saved Britain (C4) ***** Family Guy (BBC3) **

By CHRISTOPHER STEVENS FOR THE DAILY MAIL

They’re certainly bright-eyed and breathless over the dessert dishes, but do we really believe they race home to make more steaming treacly sponges? Do they dream every night of pink wobbly blancmanges?

Arthur Williams showed us, in The Plane That Saved Britain (C4), what passionate TV really looks like.

The former Royal Marines Commando was giggling, weeping, gasping, squealing, roaring and punching the air as he inspected a De Havilland Mosquito, the forgotten weapon in the RAF’s wartime strikeforce — and then he got to fly it.

Forgotten hero: The de Havilland Mosquito (‘The Wooden Wonder’, also known as ‘The Timber Terror’) is believed by some to have been more important to the RAF than the Spitfire

It was all the more poignant that Williams, best known for his coverage of last year’s Paralympics, has been unable to walk since a car crash six years ago.

He plainly wasn’t going to let a detail like that keep him on the ground. When he hauled himself up into the cockpit by his arms, you could see the veins standing out on his neck.

Williams didn’t just love this plane, he worshipped it, and the men who flew it. And though they were in their 90s, the airmen who piloted the Mosquito in strikes against the Nazis had lost none of their affection for this 400mph wooden marvel.

‘The plane would take an awful lot of punishment,’ reminisced Bud Badley, 93, over a pint of bitter.

‘One time, I came back from a mission flying a lot of holes held together by bits of aeroplane.’

John Trotman, another wartime pilot and, at 93, still flying, remembered piloting the Mosquito along German railway tracks, releasing his delayed-action bombs at the mouth of tunnels to block the lines.
‘You don’t train for that,’ he shrugged. ‘You just do it.’

Tired: After 15 years on the air, the jokes in Family Guy are wearing a bit thin

Hero worship shone in Arthur Williams’s eyes, and no wonder. But his deepest passion was for the plane itself. The prototype was first offered to the RAF in the late Thirties, but top brass could not see the advantages of a plane made from wood.

Designer Geoffrey de Havilland, then aged 57, would not be deterred.

He built it in secret, then showed it again to the RAF — at a time when Britain was desperate for a bomber that could outrun the German Messerschmidt and attack fast enough not to be stopped by anti-aircraft guns.

Some historians believe the ‘Mossie’ was even more important in winning the war than the Spitfire. But its wooden frames soon rotted in peacetime, and the plane was forgotten.

But the scowling, grimacing dolls in the furniture company’s latest advert are downright nightmarish.

Every time that plastic hand whisks back a shower curtain, I expect to see a carving knife come stabbing down.

Williams, who first heard of the Mosquito as an eight-year-old making Airfix models of warplanes, tracked down the only one still flying, a recently rebuilt plane owned by a U.S. billionaire.

His sheer cheek, demanding to fly in it despite health-and-safety protests, made winning TV. And his euphoria as he took the controls was contagious: ‘The power . . . this is just insane. The most thrilling adrenaline junkie ride you will ever experience in your life. Man!’

Press cuttings from my latest series ‘Flying Across Britain’ 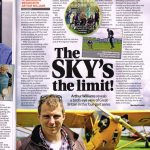 Channel 4 blessed us with two new series, back to back, offering to show the viewer a hidden side to Britain: the top. The first, Flying Across Britain with Arthur Williams, promised a unique perspective by taking to the air. The second, Hidden Britain By Drone(★★★☆☆), promised more or less the same thing.

Arthur Williams is a former Royal Marine. Ten years ago, he was badly injured in a car accident and now uses a wheelchair. Eight years ago, he acquired a pilot’s licence and now he flies his 1943 Piper Cub from airfield to airfield, for fun. I don’t know if you have been taken up in a tiny plane by an enthusiast, but I have – and I could expend many words describing the extent to which it is not my cup of tea. I suppose that is what TV is for: to allow you to experience an activity that in real life would make you feel like a sick hostage.Advertisement

Williams’ journey began in his home territory – the south-west – and it soon became clear that the secret parts of Britain known only to the single-engine pilot are not landscapes viewed from overhead, but the airfields themselves. They are often beautiful – Compton Abbas, on the chalk plateau of Cranbourne Chase, is reckoned to be the most picturesque in the UK – and they are home to odd artefacts and even odder people.

Henstridge airfield in Somerset still boasts an old “dummy deck” – a runway built to allow pilots to practise landing on aircraft carriers. Williams landed short and went long, but his plane requires 275 metres (900ft) of stopping room, more than twice the length of a carrier deck. At Henstridge, he met Richard Browning, who was busy building his own jetpack arms to allow him to fly like a superhero. The testing phase had hit an obstacle Browning calls the death zone: at any altitude below 150 metres, a parachute would be of no help in an emergency. For now, he skims along the runway, toes just off the ground.

Elsewhere, Williams discovered a man turning out wooden propellers for antique planes and visited Cotswold airport – formerly RAF Kemble – where they now strip down old commercial aircraft for profit. A salvaged Boeing 747 engine can fetch more than £1.5m, although they once found a pack of cocaine in an old toilet that was worth double that.

Williams makes for an engaging and enthusiastic guide to this strange little world. As long as I don’t have to ride in the back seat, I am very happy in his company.