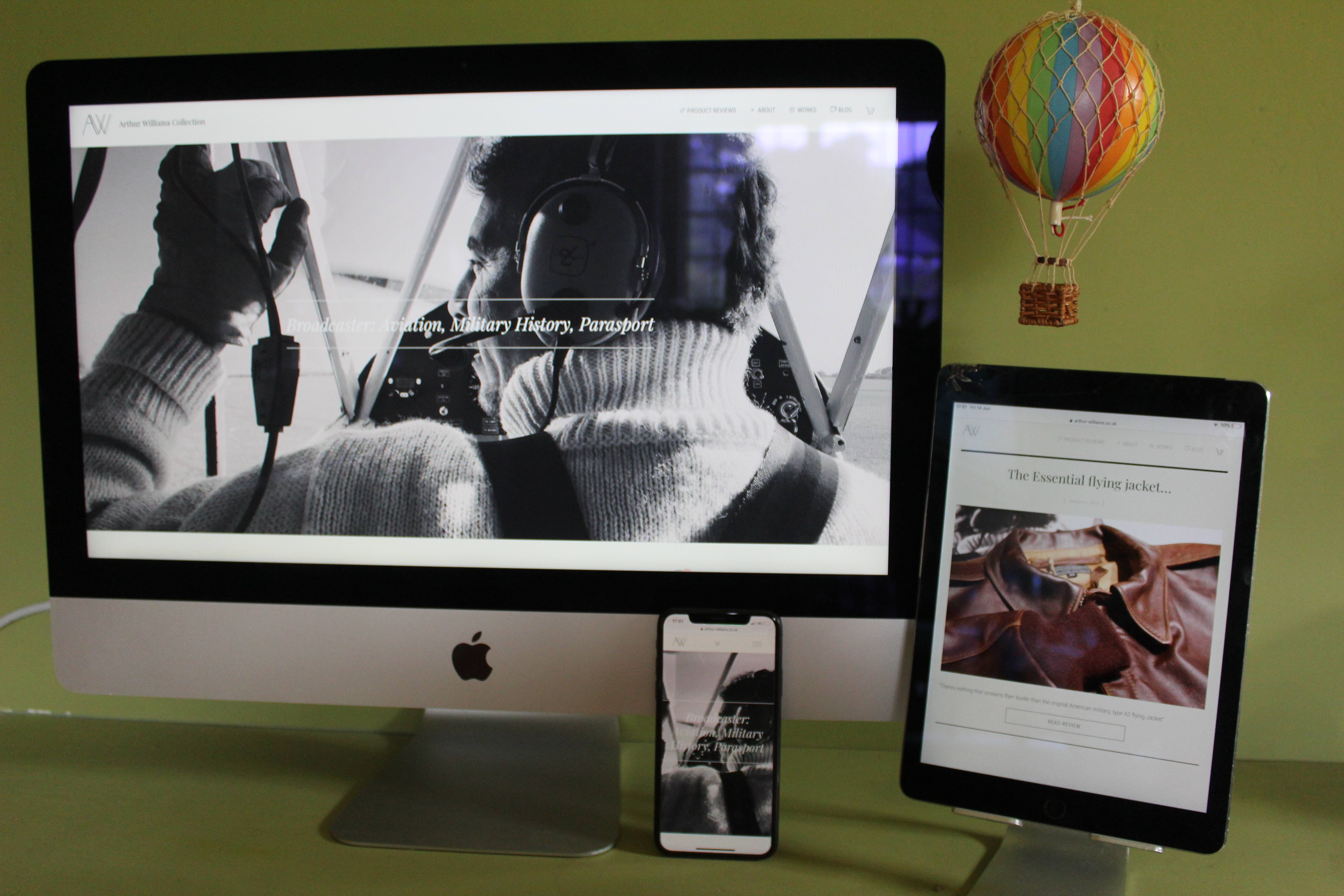 It’s been some time since I last posted a blog entry. I’ve got a pretty reasonable excuse though as I have been very busy beavering away with the website overhaul. Not only that, but there have been a lot of changes going on recently, so you’ll now notice the website offers products for sale, which I hope you’ll get the chance to have a look at.

I’ve decided to take the plunge and start up my own retail business. I’ve been pulling together small, generally aviation related producers who create really wonderful stuff, items that I really appreciate and want to shout about that I use myself, either in the air or around my home.

As you can imagine, it takes quite a lot of work creating these relationships, negotiating terms and then creating branding, packaging and everything in-between! Though it’s a new venture for me, I’m really excited about watching it grow and gradually adding to the range over time.

It’s funny how sometimes the smallest things get you excited, like the swing tags for example. I found a cracking print press in chipping Campden called Cherry Press, David there has this gorgeous, old Heidelberg machine and produces just the best swing tickets for my stuff. They look so good when combined with the best quality A2 leather jackets produced by Aero leathers in Scotland for the Arthur Williams Collection.

I’ve also got lots of broadcast projects on the boil as well this year, including a first for me with the BBC next month.This is a great step up for me, I can’t disclose too many details at this point, but I can say that it’ll be a three day live event that is aviation themed. For anyone who enjoyed ‘Flying across Britain’ then I think you’ll really enjoy this.The first broadcast will at 8pm, July 22nd on BBC 4.

As many of you may know, I’ve begun commentating for the blades aerobatic display team which is so much fun! I’ve known the blades for many years now, to be joining the team and going to all the major air shows with them is just brilliant.

Brazilian aircraft manufacturer Embraer are also keeping me busy with the Paris air show next week. I’m looking forward to possibly seeing some of you there and sharing pictures from the show. No doubt there will be some pretty spectacular stuff in the show, including of course the E2 E190 with its latest livery which is bound to get a lot of attention.

Expanding my duties as ambassador to the light aircraft association, I’ll be producing and presenting a series of 6 films for them of which I’ll share the links to in due course. Heads up for anyone who is considering joining the LAA, I think they’ll be very useful for you to watch.

Looking ahead, I also have the European swimming championships in September and the 2020 Paralympic games once again with Channel4.

With any spare time, I have also been busy with the small task of rebuilding EY’s wing! (which I’m really happy to report is very close now). I’m hopeful that she’ll be flying again before the end of the month. Make sure you follow my social media channels for updates.

Thanks for reading. Have a great weekend.

The year on reflection….

To the New Year and Beyond! (As Buzz lightyear once said… ish ha!)

As 2018 draws to a close, it gives me time to
reflect on the past 12 months and all the opportunity I’ve had. I’m looking forward to a new year and excited to see what 2019 brings.

My Series ‘Flying Across Britain’ which was broadcast in August on channel 4 was a big highlight. After working so hard on it during the Summer of 2017 it was really enjoyable to sit back, watch it come to life and enjoy the adventures I was lucky enough to go on.

So many people got in touch with me on social media off the back of this series – sending their comments and opinions. I love receiving people’s feedback and is honestly so great to see so many people who love something I’m so passionate about also.

It was unprecedented to receive such great reviews and as a result I found that lots of people were inspired to take to the skies either for the first time or revalidate old licences.

I’ve worked with Embraer throughout the year creating some really cool mini programs … Keep an eye on the Embraer YouTube channel, where you’ll be able to watch all of them. There’s also some yet to hit your screens.

Going into 2019 I’ll hopefully be traveling to China, Kazakhstan and many other countries with Embraer promoting their fantastic new commercial airliner the E190 E2.

I’ll also be venturing into new ground as I begin work with new broadcasters and organisations *watch this space* Make sure you follow my social media pages and here to keep up to date with all the latest offerings.

So much to be excited about in the near future and happy to have a breather over the holidays and spend time with family.

Have a great Christmas everyone and I’ll see you on the other side!

END_OF_DOCUMENT_TOKEN_TO_BE_REPLACED

Since Flying across Britain hit our screens on channel4 just two Sundays ago, you have been getting in touch in the masses!

Over the last couple of weeks, I’ve received thousands of messages through Twitter, letters in the post, texts, emails etc. It’s been really difficult for me to respond to all of them and so I wanted to put a message out to show my appreciation for your kind comments and say thank you for watching and supporting.

Throughout filming the whole team worked so hard and with such passion and I really think it shows through in the series. We wanted to show British aviation in all its glory, not just focusing on the big heavy duty stuff but right down to the grass roots as well.

When you have a platform such as a massive UK terrestrial broadcaster you have a huge reach to get your voice heard about the things you’re passionate about. I’m lucky enough that I get to do that. For me aviation is that, my passion, and particularly general aviation, which needs this boost at the moment.

I’ve been really encouraged by everyone who has written to me saying they are going to get back into flying, and get their kids involved or even just inspiration for tomorrows day out.

A BIG and truly heartfelt thank you to you all for allowing me to share my passion.

Please do keep getting in touch, I love reading your comments and I’m sorry if I haven’t been able to get back to all of you yet. All in good time.

I hope you enjoy the rest of the series.

In episode three we visit the stunning west Scottish Highlands and Islands. Set amongst the breath-taking mountains and the vast Atlantic Ocean I go in search of a sunken American maritime aeroplane, try my hand at landing on Loch Lomond in a float plane and get a privileged insight into our national air traffic service at Prestwick centre.

Tune in this Sunday 19thAugust @ 7pm for the next instalment and if you want to catch up or watch any episodes again simply follow the link below.

As another Paralympic Games comes to a close, I have a little time to now reflect on being a part of it.The Winter Games are experiencing a really exciting time of growth, especially for us here in Great Britain.Unlike with the Summer Paralympics, there are a lot fewer sports; six rather than the twenty-two sports there were in Rio 2016. Wow, how was Rio two years ago already?

Four years in Sochi there were 5 sports, snowboarding was making its debut at a Paralympic level; a demonstration sport with two events (Men’s / Women’s visually impaired standing snowboard cross). This year there were 6 sports with Snowboarding now as a standalone event as opposed to being an alpine event. It’s not been 100% confirmed but looking ahead to Beijing 2022, it’s likely that Bobsleigh will join the Paralympic event schedule too!

The Winter Games are constantly growing, athlete participation increases year on year as does ticket sales, countries competing and support.On top of this, from a British perspective we competed in double the number of sports we did in Sochi 2014. Owen Pick, James Barnes Miller and Ben Moore all debuted at the Games in the snowboarding. We also had Scott Meenagh competing in every biathlon and cross country event; Something we haven’t seen at a games in 20 years.

Team GB didn’t fail to fulfil their ambitions either. ParalympicsGB set an optimistic target of seven medals and by the close of the Games, the team of seventeen had met this – even if they left it almost till the very last event!

We also decorated our most successful Winter Paralympian, Menna Fitzpatrick who took home 1 bronze, two silver and a gold.

Hopefully, with all this success we will see an increase in funding from the UK’s Sport Council and then come China in four years’ time, we will be celebrating even more British success and even more great sport.

Rio 2016 Paralympics were the third games that I was lucky enough to anchor for Channel 4. And it doesn’t get any less terrifying – the prospect of presenting a live sporting event for a major UK broadcaster is a daunting task. But it is also exhilarating. You are the person that is presenting  coverage that matters, that people want to see – there isn’t anything quite like that feeling.

Between Ade Adepitan and I, we did 3 hours a day for the 11 days of the games, that’s 33 hours of live coverage on Channel 4. In the weeks, days and moments building up to going live again you wonder to yourself- will I be able to do this job well, do it justice and fingers crossed not look like a prat?

And then the sport begins… Once again you find yourself wrapped up in a celebration of pure greatness, you lose yourself in the atmosphere and there are no worries left about the job in hand, the anxieties, the doubts, it’s all about being a part of the movement you feed from the spirit of the games. The most important thing is the people – it’s what they achieve things that make you gasp in awe, but also bring you to tears of joy as you watch. A particular highlight for me, was a swimmer from Nepal with no arms finishing about a minute behind the pack but no one cared because the support from the crowd, the noise caused by the cheering almost raised the roof! He tried and he succeeded. And we loved him for it.

So as I sit on our aeroplane flying home having time to reflect upon where the last two weeks have gone. There’s no better feeling than coming away from these games watched by the world knowing that you have been, in part, responsible for helping change people’s lives. It’s a feeling of complete euphoria.

And we really have help people change their perspectives – RJ Mitty put it beautifully in saying that “the Paralympics encapsulates all that is great about the human spirit, when people are broken and presented with huge challenges we have the chance to see what we as humans are capable of and its awe inspiring. In watching how others deal with issues that to most would seem insurmountable the Paralympians give people the strength to believe in themselves and motivate them to improve their quality of life. “

So would I ever present the Paralympics again???

Silly question really. Where do I sign? J I might be a bag of nerves those moments before we go live, but I wouldn’t pass up such an overwhelmingly incredible journey. It is hands down, one of the most rewarding things I’ve done to date.